The Restaurant The Chef 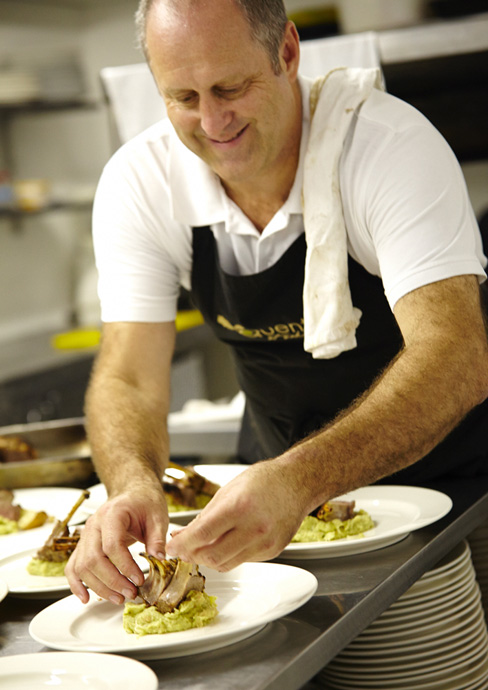 This highly accomplished chef started his professional career in the hotel business in 1985. With a four year apprenticeship at the Southern Sun flagship President hotel, three years of which was under the stewardship of legendary chef Garth Stroebel.

His last year saw him at the helm of the multiple “hotel of the year” award winning Finches restaurant.

A further four year stint saw Quentin appointed as the head chef of the award winning ‘John Jackson at the Peninsula hotel’ restaurant.

Quentin was firmly moulded by these two great luminaries. Garth with his rigorous, disciplined kitchen regimes, and John with his ground-breaking, stellar, creative talent.

Quentin’s hold on the wheel of the Jackson’s engine room soon attracted the attention of the doyennes of the Cape foodie set. He was mainly mentored by Phillipa Cheifitz and Annette Kessler, and prominently featured in the Jane Raphaely publications, and at her dinner table.

It was time to go solo….

Quentin started his own catering business in 1996. He was immediately snapped up by Sol Kerzner who brought him in to run his sprawling Leeukoppie Estate kitchens.

Completion of his first season with Kerzner was a baptism into the world of breathtaking world class hospitality. The climax of which was the undertaking of his first of 16 legendary New Year Eve parties.

Kerzner gave Quentin the scope and means to unleash his talent, so much so that the phone began to ring off the hook as the cream of Cape society scrambled to procure his services.

His endeavours saw him increasingly in demand internationally. During the early 2000’s he was blazing a trail up and down the French Riviera, being chauffeured between yachts, villas and markets principally by the London based tycoon Jonathan Green and family.

Not surprisingly Quentin’s reputation took him across the pond to the Caribbean where he set up camp in the Bahamas. This tax haven saw him undertake some of the most spectacular parties. Quentin hit small desert islands ‘Okinawa-style’ to set up full service and helicopter fly-in parties. Russian émigré’s threw extravagant red velvet and gold Romanov caviar parties for the likes of the Connery’s, etc. …. and a couple of arms dealers!

Many weekends in Cuba added an eclectic tropical influence which carries through in his summer cooking.

Quentin’s diary saw him abroad for eight months of the year. Only then to land on Kerzner’s lawn to undertake another jam packed Cape season.

Quentin was deeply influenced and mentored by Sol Kerzner’s unparalleled hospitality skills. An association which over the sixteen year relationship saw an invite to Leeukoppie as the hottest ticket in town. Quentin’s running of the New Year’s Eve parties set the standard in scope and scale as the most spectacular and extravagant annual social event in South Africa.

His career was further benchmarked by the likes of Richard Branson, the King and Queen of Spain, Nelson Mandela, the Queen of Holland and Denmark, the Thatchers, Clintons, and according to Robert DeNiro, he makes ‘the best martini in town…’

After seeing his three children shoot up under him it was time to come home to roost.

His opening of the Cape Courtyard restaurant in Hout Bay, tiny as it was, quickly became a Mecca for local connoisseurs.

His guinea fowl, rabbit, tuna and marrow bones are still revered around dining room tables and consequently after years of being asked “when are you opening again?”, he has leapt at the opportunity arising on the magnificent Oakhurst farm.

This highly accomplished chef started his professional career in the hotel business in 1985.

Gone are the days when we hankered in anticipation at the first seasonal harvest of our favourites.

Proudly hosting
you for over